by The Last Poets 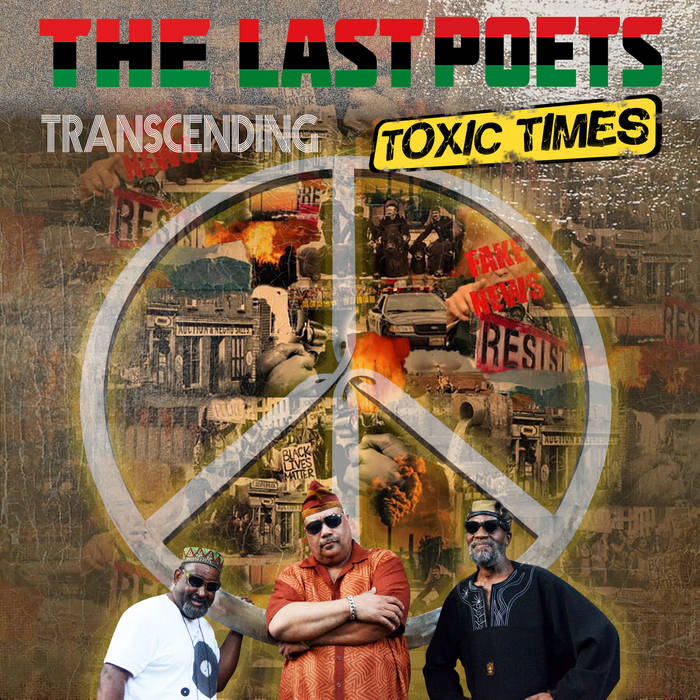 On a winter day just outside Philadelphia The Last Poets and Jamaaladeen Tacuma gathered at the Ropeadope Room for an interview in anticipation of their new release, Transcending Toxic Times. The mood was light, a casual gathering over soul food with the label, the producer, and the poets themselves. We cued up the album, brought the sound up and walked through the final recording. It was the first time all three had heard the finished album, and the interview was soon put on hold as three men sat, transfixed and intent, leaning on every note and word as they walked through their memories and even their purpose. Dare we say tears were shed, and as we spoke with cameras rolling it soon came out that THIS was the definitive Last Poets album.

50 years ago Abiodun Oyewole was in the middle of it: vocally challenging both the oppressors and the oppressed. Looking for truth to be spoken at any cost, mourning the loss of Malcolm and Martin among many others named and unnamed in THE struggle of the time. A struggle that is more relevant today than it ever was as African Americans continue to press the nation for truth and equality. Dun met Umar Bin Hassan at a Black Arts event in Ohio, and Umar made the trip to New York to join the group. Baba Donn Babatunde showed up later, adding percussion to the poetry.

The history is strong, much has been written and is easily found. But the spirit of these men in their common creative interaction is the real story. 50 years of perseverance, of bearing witness to the most atrocious of crimes, 50 years of personal challenges and yet still and adherence to the higher principles of love, or respect, and of kindness to your fellow human.

Enter Jamaaladeen Tacuma. It takes someone who understand the essence of The Last Poets better than the poets themselves. A man who knows the history from the inside, but has a foot in the music world as well. Tacuma’s bass playing is refined, yet just as swinging as if it were not. But it is his role as producer here that elevates this album above all others. A knowledge of what people want to hear, an understanding of what the message is and how it MUST be delivered, and the skill and friends to blend the two. This is not poetry set to music, nor is it music made for poets. This is a seamless transfiguration of the groove, the words, and the essential human elements that live between the notes and the words.

Transcending Toxic Times is a broad work of human emotion: Anger, scorn, frustration, challenge, beauty, sorrow, love, and joy are all present. The spoken word is rhythmic, melodic at times. The baselines and the groove are irresistible, and the message is unavoidable.

On that winter day we witnessed the realization of four great artists: that their individual and collective contributions had transcended each of them and ALL of them. That they were in the presence of something definitive and transcendent.

Wadud Ahmad | Poet We Are The Last Poets, Soul Reflection
Ursula Rucker | Poet Don't Know What I'd Do
Malik B | MC Young Love

This Wind You Hear Is The Birth Of Memory. When The Moment Hatches In Time’s Womb, There Will Be No Art Talk. The Only Poem You Will Hear Will Be The Spear Point Pivoted Into The Punctured Marrow Of The Villain, And The Timeless Native Son Dancing Like Crazy To Retrieved Rhythms Of Desire Faded Into Memory. Therefore, We Are The Last Poets Of The World. ... more

Bandcamp Daily  your guide to the world of Bandcamp

Featured sounds from Fly Lo and Ahmed Idris, plus Mother Nature hops on to drop off new project